Central Committee member, Michael McKinley, provided a first-hand account of what he had witnessed at the Polk County Central Committee meeting on Monday night, shortly after Gubernatorial candidate Jon Neiderbach moved to overturn the speaking ban on Congressional candidate Heather Ryan, seconded by Co-Chair Dylan Funk, and after the meeting adjourned.

“The PCCC voted to reverse the events committee decision to ban Heather Ryan from the steak fry (a brilliantly simple motion by Jon Neiderbach). Unfortunately, Sean, unilaterally from the chair, inserted the words “If any other congressional candidates are invited to speak…” just before the final vote. It passed, I think something like 33 to 22. The words Sean added now give him the right to not invite Heather by banning all congressional candidates from speaking at the steak fry.

After the meeting, I asked him if he intended on punishing all the congressional candidates—and us regular Democrats who really need a congressional candidate forum—out of vindictiveness. He blew up. He seemed primed and ready for me when I walked up. We got into a really ugly battle about how this seems like the Polk County Convention all over again, and an excellent example of the Party favoritism in the 2016 primaries that is still tearing this Party apart.

Then he kept saying over and over how “my people” were calling his people bad and racist names, like calling Kimberly Boggus a “monkey” on Twitter. His events groupies surrounded us and I thought they were going to physically attack me. One guy, in particular, was especially aggressive—I think his name is Brian but I didn’t get his last name, I kept asking because Sean said he was on the events committee and was going to be voted in as a Central Committee member next meeting and I told him I was going to do everything I could to block him.

They were all screaming at me. Sean said several times, when he answered in the affirmative to my question about vindictiveness, “Well then Impeach me! Go ahead and impeach me!” I kid you not. I told Sean, “Well, thanks, maybe impeachment is not such a bad idea.” Then I left. Whew. I’m still reeling.”

PVI is still investigating what transpired last night in an attempt to corroborate accounts and have learned there may possibly be video available of the meeting.

PVI received screenshots from Sean Bagniewski’s Facebook page regarding last night’s incident. You will find them posted below. 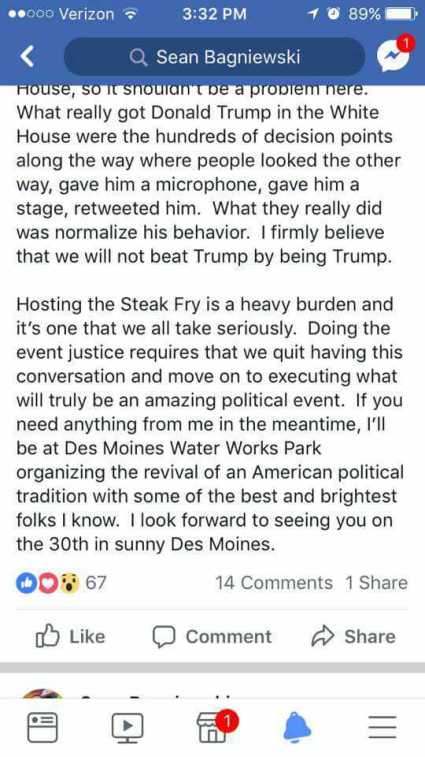 We will continue to monitor and report updates as they become available.