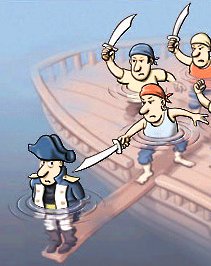 Sean Bagniewski was elected to replace outgoing and embattled Chair Tom Henderson, to help right the ship of the Polk County Democratic Party after the disastrous 2016 bloodbath and the chaos that ensued at the County Convention. There was hope that unity could be achieved through the appointment of his rival for Chair, Progressive Dylan Funk, as an Honorary Co-Chair. However, since he was seated,  Bagniewski had come under fire for being disorderly, inattentive to his duties, and nearly “Trump-like” in his behavior which has brewed into a potential action to have him removed as Chair just six months into his term.

Criticism of Bagniewski had been heavy on the Progressive side, as there are some that still allege that he was partially responsible for tampering with the numbers that shifted last year’s county convention win from Sanders in the morning to Clinton in the afternoon by telling Sanders delegates that they could leave before the final count. In an attempt to show unity with the Sanders Democrats he appointed his Progressive rival for Chair, Dylan Funk, to be “Co-Chair”. Unfortunately, while Funk was excited for the opportunity and intended to pour his soul into the position, it was clear Bagniewski never intended the position to be more than ceremonial at best.

Bagniewski had also come under fire for the sudden removal of the executive director, Tamyra Harrison for reasons yet to be disclosed. PVI had just been made aware that those emailing the Polk County Democrats email account have noticed that Bagniewski has been the only one replying to emails, which has lead some to believe that he may now be the only one with access to the account. This seems odd for the largest county in Iowa, especially one that formerly had a robust and efficient Communication Committee, which is also headed by the current Vice Chair of the Polk County Democratic Party.

From the looks of his public Facebook posts, he seems to have hosted a private “Polk County Democrats” event where it seemed his personal friends and not leaders of the neighborhood groups, were invited. One would assume that his executive committee was invited, but they were not visible in either of the public Facebook posts showcasing photos with Senator Merkley. 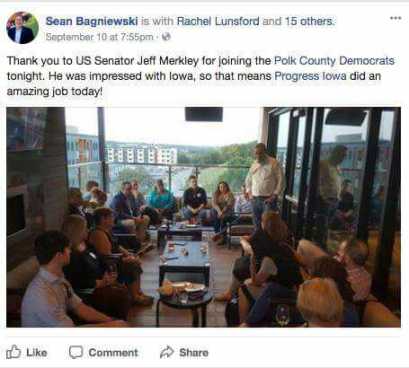 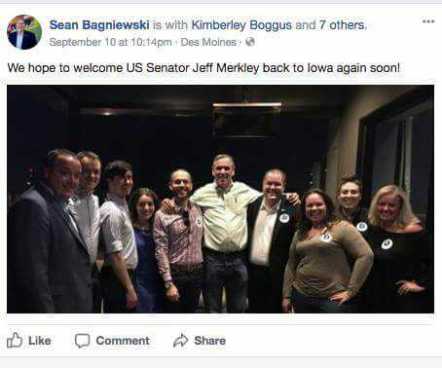 His alleged tantrums over things people said on social media and even published here in PVI had resulted in a spree of Twitter and Facebook blocking, as well as alleged threats and strange accusations to members of the State Central Committee and Progressive Caucus. There had been some criticism that Bagniewski was prioritizing his personal agenda, over his duties as Chair at a time when Democrats are calling for leadership in the hopes that they may regain legislative ground in the midterms and steal away Terrace Hill from the GOP for the first time since 2010.

It was not until the gag order of Third District Congressional candidate, Heather Ryan, at Bagniewski’s Steak Fry event by the event subcommittee without first consulting the County Central Committee or Ryan, that lead to widespread criticism. The news spread to a national level and turned the heat up on his behavior for making the entire county party look bad to the rest of the country. Ironically, in spite of the allegedly divisive behavior of Bagniewski, the censure of Ryan resulted in both Progressives and Centrists of the party coming together in response and decrying the action with demands to “let her speak”. Finally Democrats from all sides have come together and, unfortunately for Bagniewski, it could potentially lead to his early exit from the position of Democratic Chair of Polk County.

PVI writer, Shannon McGuire recently sat down with Polk County Co-Chair Dylan Funk to get his take on the controversy surrounding the leadership and the mutiny that is rumored to be forthcoming. You can find that interview here.

The meeting was reportedly an emotional rollercoaster after Democratic Gubernatorial Candidate Jon Neiderbach made a motion to overturn the event committee decision to ban 3rd District Congressional Candidate Heather Ryan from speaking at the Steak Fry event. Co-Chair Dylan Funk seconded the motion. The entire meeting broke down from that point and reportedly resulted in Bagniewski stating that the events committee could, and likely would, disinvite all Congressional Candidates from speaking.

PVI hopes to get a clearer report as to what happened tonight and will continue to monitor this story as it develops.