Letter to the Editor: “I Am Still Learning…” 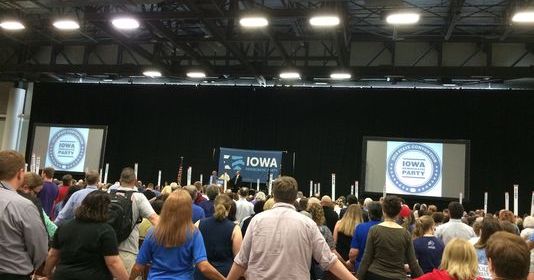 I am still learning how things work.

I understand and appreciate the concept that all politics are local. I also understand the idea of “down ballot” victories. And I recognize the reality that most people vote straight party ticket. The Chairman of the Democratic Party comes to town and unveils the national platform — pre-Convention. It aligns with maybe three items on the state platform.

I think back to the county, regional and state party conventions and I recall a recurring presence — White, middle class, suburban folks in their 40s and 50s, well-meaning and devoted.

I attended Iowa Starting Line’s, “Next Steps” event last night at the Des Moines Social Club. I looked around. What did I see? White, suburban middle-class people in the 20s and 30s, well-meaning and engaged.

Then I think back to two weeks ago, doorknocking from 2nd Avenue North of the I-235 by-pass, from the hospitals to Euclid Avenue, West to Martin Luther King Boulevard. Hispanics, Blacks, Bosnians, Sikhs, others that, honestly I could not identify.

And I think of the doorknocking I did on Des Moines’ south east side, where some houses on the 2012 voter rolls don’t even exist anymore because of the Martin Luther King Boulevard by-pass, and traversing that by-pass to get to the homes, from about east Fifth Street to the Fairgrounds. The same variety of ethnic and religious and national backgrounds.

I think about the people I met, and the houses I went to, and the living conditions.

Then I think about the Party, and the platform, and the enthusiasm of these White suburbanites. And I think about the same sort of upper-class Caucasians in the DNC, and the DC/Maryland/Virginia vortex that comprised the public relations team the campaign hired to advise it.

What did we, as the county, state or national Democratic Party, offer to the people whose homes I visited? Before getting lists of doors on which to knock, how many of us gave these workers a second thought?

Forget, for the moment, about messaging and slogans and likeability and trustworthiness, and getting more young people who look and live just like us to run for office and get engaged in the political process.

I have wondered, since doorknocking, what platform priorities included these people? Really.

More than that though, is, what authority, what power, does the State Party have at all? When Debbie Wasserman-Schultz comes to town and says, “this is what we’re doing. These are the three or five things we’re promoting,” what was the point of spending mindless hours pushing and shoving and screaming about the 101st platform provision in the wee hours of the morning at these — what appear now to be — silly conventions?

Is this exercise of creating these platform planks just some sick scientific experiment, some American version of the French Foreign Legion, to put human beings through a crucible and see what sort of team we can create? Is it some sly way to get people pumped up and angry, thus vulnerable, and convince them to join the Party’s various committees?

These are not rhetorical questions. They have to do with the fact none of that seemed to matter once the DNC Chair came to town.

As I try to distill all of it, I question how — or, more to the point, whether — the structure accommodates the implementation of its state platform to its state base. It doesn’t seem like, for all of the ego and boisterousness and shouting and shoving that went on at the county convention, any of it translated to the Mexican-American family with the new big red truck purchased for no cash down, and monthly payments at 18% interest, parked in the single-lane driveway of a one story 1200 square foot two bedroom house, with three kids running around and a couple of Big Wheels in the back yard.

Maybe it does and I am just too novice to all of the moving parts to recognize it. Perhaps I was just not a studious enough party member to doorknock. Maybe I was not sufficiently armed with information before putting myself out there.

I just know that there were times I genuinely felt like a paternalistic snake oil salesman trying to convince people that I knew better than they did about for whom they should vote.

I sure did not know why these good, hard-working, salt of the Earth people should vote for either of the two Presidential candidates. But I did know some of the local candidates, having spent time with them. And I sensed that they were intimately familiar with their constituents and what their people wanted and needed. There again, when I spoke with these candidates, they gave me bread and butter answers — jobs were number one.

In the same moment of clarity when I realized how little I had to offer in terms of encouragement to these people I visited, I knew the local candidates would get shellacked if Hillary Clinton didn’t win. But I was at a loss to say how these Des Moines residents’ local legislative candidate would have Hillary’s ear when it came to anything about which their local constituents cared.

Perhaps I have much to learn and this all actually functions in a way that actually impacts the lives of the waitress and the union worker and the guy who used to work at Sears and the nurse at Broadlawns.

Right now, though, it is all a dysfunctional blur. If I can’t articulate how it works then, the guy who gets up every day and heads out to work so he can pay off his vehicle and his house, and his health insurance, and his spouse who does the same, probably doesn’t either.

I just know that, for all of the talk and all of the earnestness, I saw, and see, a very homogenous group of folks wanting to do something important, just like I saw in the conventions leading up to the elections. This group resembles the folks I met at their homes, not at all. Not locally, not nationally.

I know the Kennedy’s did not resemble the folks in Appalachia, and Bobby Kennedy didn’t look like the folks in the street to whom he spoke so eloquently, announcing that Martin Luther King had been assassinated. I know that Franklin Delano Roosevelt seemed, on paper, to be about the last person one would expect to address a nationwide poverty epidemic.

But I have lived long enough and read extensively enough to recognize that their message, and their actual implementation of the message, helped a lot of people they did not meet at college reunion cocktail parties.

And I know they succeeded within the confines of political party frameworks that were no less dense than the one in which we find ourselves.

I do not know how it works. I just know that no priority was given to the working man and woman in this campaign, and I don’t care how many special interest groups we attracted because all of their members — for all of the messaging — still have to eat and pay bills