Dennis Mathas is the Progressive Choice

Posted on November 3, 2016 by Jason Frerichs Leave a comment 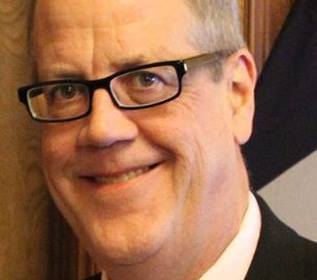 The Iowa Democratic Party Progressive Caucus is proud to the highlight the candidacy of caucus member Dennis Mathahs. He is a populist candidate who was inspired by both Bernie Sanders and Hillary Clinton. Dennis is running for State Senate in District 38. Dennis is an attorney and owns his own practice.  He was inspired to attend law school at the age of 39 due to his step-son Dylan.  Dylan was born with spina bifida.  While attending school in Iowa City, the school district refused to make accommodations that he was guaranteed to by law.  When he was learning to drive the school district refused to spend the $550 necessary to make the student driver vehicle handicapped accessible.  Dennis Mathahs was able to lobby the district and won.  This accommodation has allowed many special needs student to learn how to drive.

Dennis has made addressing income inequality and falling educational standards his top priorities.  At the October 12th League of Women Voters he had the following to say, “There are people with full-time jobs working minimum wage 52 weeks a year, without taking any vacation days, that make $15,080 per year, and some of these people work for very profitable corporations. These workers make it possible for corporations and their executives to reap large profits that do not go back into the economy; thus taxpayers subsidize the workers, who are forced to be on public assistance, and also the corporations, whose profits benefit only the top one percent.” Education is very important to Dennis. He strongly believes that we need education reform in Iowa. He stated that Iowa was once first or second of the states in education, has now slipped to 21st or 22nd place.  “We need to make it so higher education is affordable,” he argued, referring to kids who, at the age of 12 or so, “have the sparkle in their eyes” and have ambitions to become a doctor, a lawyer, an engineer, but who, at the age of 15, are discouraged.  “The spark is gone” because they have learned how expensive college is and “they have totally changed their whole outlook on life.” Dennis has been endorsed by the ISEA due to his stance on education. “On behalf of the Iowa State Education Association (ISEA) representing more than 34,000 members across the state, we are pleased to recommend Dennis Mathahs for the Iowa Senate,” said ISEA President Tammy Wawro. “We believe Dennis will do what is best for all of Iowa’s students regardless of the ZIP code in which they live and be a voice for education professionals as important decisions are being made about our public students and schools.”

Dennis strongly believes that climate change is real and we need to take immediate steps towards improving our environment. The issue of water quality is very important to him. He had the following to say, “There are huge costs to doing nothing. While local Iowa farmers have been good stewards of the land and of the water, today we see out-of-state corporations dominating land and water with very little regard for the results other than profits.  The people responsible for the pollution need to be responsible for cleaning it up.  In addition, remedies such as wetlands, cover crops, and buffer zones should be used to their fullest potential.” He also supports a moratorium on CAFOs. Dennis shared an anecdote about visiting a friend’s house that was close to a CAFO. He called the question a property issue, one that affects both property values negatively and hampers the ability of a person to enjoy his or her home and land.  He mentioned attending a friend’s birthday party.  Because a CAFO was close by, [the air] “was unbearable—I mean, the number of flies … it wasn’t even normal air.  CAFOs “are not the best use of Iowa.”

When asked why he decided to run for office, Dennis answered, “I am running for Senate to make sure our state moves into the future on the right track. I will fight for fully funded public education and affordable college. I will work to improve our state’s water quality. I will advocate for the mentally disabled, and I will push to raise the minimum wage. This election will determine the direction of our state and our country, and I hope to help make sure that direction is forward.” The Iowa Federation of Labor has endorsed Dennis Mathahs for Iowa Senate District 38. “We are proud to endorse Dennis for Iowa Senate District 38. We are confident that Dennis will be there for hard working Iowa workers. He will fight to ensure that Iowans receive a living wage that represents a fair share of the profits that there labor produces. We encourage our members to support Dennis Mathahs for Iowa Senate District 38,”said Ken Sagar, President, Iowa Federation of Labor, AFL-CIO. senting 34,000 members across the state, we are pleased to recommend Dennis Mathahs for the Iowa Senate,” said ISEA President Tammy Wawro. “We believe Dennis Mathahs will do what is best for all of Iowa’s students regardless of the ZIP code in which they live and be a voice for education professionals as important decisions are being made about our public students and schools.  “It is clear that Dennis Mathahs is the progressive choice. Tom Harkin said, “Voting is like driving. If you want to move forward, put it in D.”